The contribution of gambling to mathematics 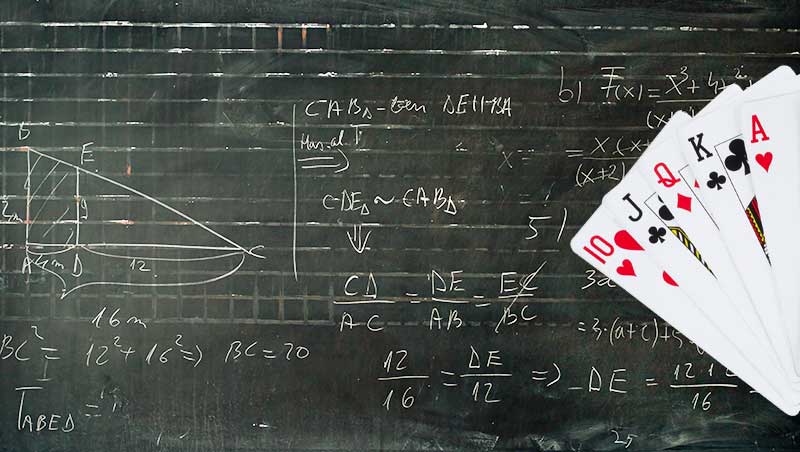 Games of chance have accompanied humanity since its origins. This form of entertainment, in which the chances of winning or losing depend exclusively on luck, includes games like blackjack, baccarat, roulette, and slot machines. Beyond their playful aspect, games of chance have also been a source of inspiration for certain fundamental concepts of science that have helped shape the modern world. At least, that is what the British mathematician Adam Kucharski points out in his book The Perfect Bet: How Science and Math Are Taking the Luck Out of Gambling. To argue his theory, Kucharski selects a series of examples explaining why and how these games of chance have changed mathematics.

The theory of probability

The Italian physician and mathematician Gerolamo Cardano (1501-1576) was also known for his fondness for games of chance, such as dice or cards. After his death, the Book of games of chance was found among his manuscripts. In this book, published posthumously in 1663, Cardano uses his own experience as a gambler to write the first work entirely dedicated to probability and present the first approach to this concept.

In 1654, the Frenchman Antoine Gombauld, known as Chevalier de Méré, posed to the mathematician Blaise Pascal a decision problem under uncertainty as follows. Two people are playing a coin toss, and the first to guess whether it lands heads or tails five times wins the prize. However, due to certain circumstances, the game is interrupted before the end of the game and with the score 4-3 in favour of one of the two players. The question is: how should the prize be divided? Pascal brought this problem to the attention of his compatriot Pierre de Fermat by correspondence. From this exchange of ideas was born the concept of expected value or mathematical hope, which determines the idea of the average value of a random phenomenon. This concept also contributed to the calculation of probabilities.

The British mathematician Karl Pearson believed that in order to understand randomness, it was important to collect as much data as possible. After trying his hand at coin tossing, Pearson went to the Casino de Monte Carlo to focus on roulette. However, he found everything he needed in Le Monaco newspaper, which regularly published the result of every roulette spin at the Principality of Monaco’s gambling establishment. The Briton focused on four weeks, observing the proportions of red and black results. He discovered strange results that were of little use to his research, although it was later discovered that Le Monaco’s reporters had made up some of the results. Despite this, his method in roulette analysis based on probability theory laid the foundations of mathematical statistics.

Henri Poincaré is considered one of the best mathematicians in history, as he was one of the greatest contributors to the philosophy of science and theoretical physics. In 1908 he published his book entitled Science and Method, where he praised the ability of human beings to make predictions. For the French mathematician, the essential aspect of chance is that it always occurs in situations in which small causes correspond to large effects. For example, small differences in the initial speed of a roulette ball make the outcome very difficult to measure precisely since it has a large effect on the square where it lands. Subsequently, this “butterfly effect” or “sensitive dependence on initial conditions” was one of the fundamental concepts of what is known as chaos theory.

John von Neumann was one of the brilliant minds involved in the Manhattan Project, i.e. the development of the atomic bomb. In addition, this Hungarian-born mathematician was also one of the fathers of modern computers. Von Neumann was interested in poker, a card game that he saw as a path to developing the mathematics of life itself. According to the mathematician, real life consists of bluffing, small bluffing tactics and wondering what the other person thinks I mean. Thus, the Hungarian and Oskar Morgenstern analyzed poker mathematically and published their research in the book Theory of games and economic behaviour in 1994. Work on game theory is considered to be the original and rigorous basis for modern social science.